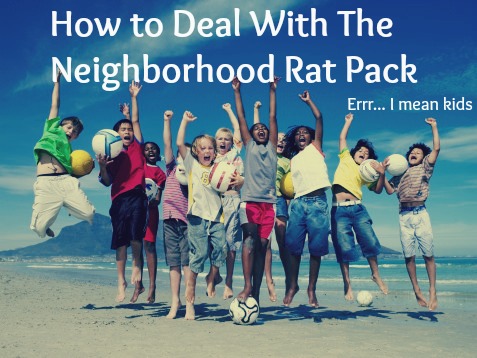 Altered version of this photo

We live in a trailer court that has an abundance of kids.  While this can be fun for our kids, it is, at times, frustrating for me.

At first, I was afraid of seeming rude and mean.  This was a mistake.  The kids began walking all over me and had no respect for my authority.  After the sixth day in a row of the neighboring 4-year-old knocking on my door about 20 times a day, I realized something: I was stressed out trying to deal with this kid in a non-authoritative manner.  He had no respect for our house rules, no respect for me as an adult, and was mean to my kids.

So, I decided to assert my authority as an adult and put my foot down.  I told him, kindly but firmly, that my kids were not interested in playing outside right at that moment and they would come out when they were ready.  That was an epiphany for me because I realized I could be an adult!

If you have a neighborhood rat pack that is taking a toll on you and your house, I have a few tips for you.

You are not ever, at any time, obligated to provide babysitting services free of charge.

Unless it’s for your in-laws.

I had one guy call his kid out of my house, ask her if she wanted to go to the store with him, when she said no, told her to be good, and take off.  All without ever asking my kids to talk to me to make sure it was okay.  Which it wasn’t because I had an appointment to get to and I had no idea how long this guy was going to be gone, who, if anyone, was at their house should I need to send her home before he got back, and no phone number in case of an accident.  In fact, I’d only ever said hi to him once.  In passing.  When he did get back, he didn’t bother letting his daughter, much less me, know he had.  I found out by looking at the cars in the driveway.

I am not very good with direct confrontation, so I didn’t go chew him out.  I did, however, begin to refuse to let the neighbor kids into my house for anything other than using the bathroom.  I also told my kids that the adult needed to talk to me before leaving their kids at our house.

You CAN be authoritative with other people’s children.

This was a hard lesson for me to learn.

I LOATHE it when inexperienced adults nitpick at my kids for perceived bad behavior.

By inexperienced, I mean those who do not have children of their own or do not work with children on a daily basis.  This is also a topic for another day.

Rather than step on toes, I was timid and unassertive.  It backfired on me in a big way and I found out that it is possible to assert my authority without acting like a drill sergeant.

If you have a neighbor kid that refuses to pick up after they’ve destroyed your house, give them two choices: pick up or don’t come back.  Oops, that’s the drill sergeant manner coming out!  You can be kind but firm.  Say, “If you want to come back to our house to play, you have to help pick up the mess you made.  That’s our rule.”  And then follow through.  If they leave without helping pick up and try to come back into your house the next day, tell them, “I’m sorry, but you can’t.  You didn’t help pick up the toys after you played with them.”

A revolving door policy is not always a good thing.

Speak to the child kindly, but firmly and follow through.  If you say your kids cannot play today because of xyz reasons, don’t let the neighbor kid wheedle you into letting him inside.

At no time are your kids EVER obligated to play with the neighbor kid.

There will be times when an overtired child will land on your doorstep bawling because your kid won’t play with him/her.  Obviously, you need to check to be sure your child isn’t being the playground bully.  If they are, take the appropriate action.  If they are not, and the neighbor kid is just overstimulated, speak to them in a  calm and firm manner as you would your own child when they are being unreasonable.  Sympathize with them (“I know you don’t want to play that game right now.”), then make a suggestion (“How about you play with something/someone else?”).  I have, depending on the kid, brought a toy out for them to play with, invited them in to play by themselves or me read to them for a little bit, or asked if they’ve had something to eat.

You should NOT feed the entire neighborhood.

Feeding someone else’s kids isn’t a great idea unless you know their parents.  The danger of food allergies and cross contamination is too great for someone who doesn’t have to deal with it daily.  Get to know the parents before you share your food.

Hopefully, you’ve found some of these suggestions helpful.  It can be hard to deal with other people’s children because we aren’t there to see their progress on a daily basis.  The best course of action is to adopt a kind, but firm manner.

2 thoughts on “How to Deal With the Neighborhood Rat Pack, er, Children (Kindly)”